China and Pakistan's sweat were not left just like this, know how has been the career of CDS General Bipin Rawat 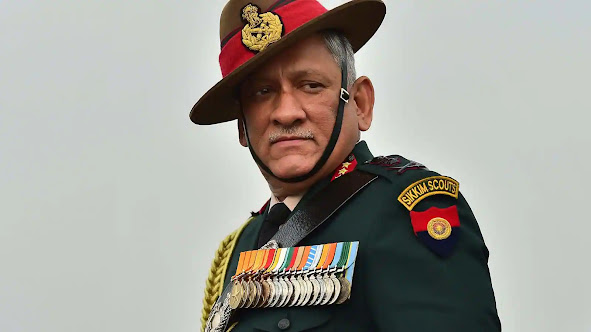 General Bipin Rawat... a name known for taking tough and bold decisions. General Rawat was the Chief of the Army Staff before becoming the country's first Chief of Defense Staff. While in this position, he took many important decisions and brought them to the end. Talking about the most important mission of General Rawat as Chief of Army Staff, it is the Balakot airstrike. In February 2019, when the terrorist camps were destroyed by entering Pakistan, the command of the Army was in the hands of General Rawat.

General Bipin Rawat was a part of many important strategic operations. As the Chief of the Army Staff, he played an important role in strategizing while attacking and destroying the hideouts of the terrorist organization Jaish-e-Muhammad in Balakot. Let us inform that after the martyrdom of 40 Central Security Force personnel in an attack in Kashmir's Pulwama, Indian military forces entered the Pakistan border and destroyed the terrorist camps in Balakot. It is said that at the time of this operation, General Rawat was commanding from his South Block office in Delhi.

Insurgency was controlled in the Northeast

Apart from this, in 2015, he had shown direction from his experience in counter-terrorist operation in Myanmar, which is bordering the country's northeastern border. He is also known for controlling insurgency in the Northeast. CDS General Bipin Rawat held various operational responsibilities along the borders with Pakistan and China. He worked in important positions in many areas including the Northeast.

Surprised by surgical strike in Myanmar

Under the leadership of General Bipin Rawat, the army carried out a surgical strike across the border in Myanmar after the attack on the CRPF convoy in Manipur. In this surgical strike, many NSCN militants were killed and their camps were destroyed. The commandos of 21 Para were involved in this action. Bipin Rawat was the commander of this battalion under the Third Corps at that time.

After the success of this surgical strike in Myanmar, the government's trust in General Rawat had increased further. As a result, Rawat was appointed as the Chief of the three wings of the Army on 31 December 2016. It is said that in reaching this point, Rawat had a long experience of working in the LoC in the Eastern Sector, the disturbed areas of the Northeast and Kashmir.

General Rawat got this honor

Surprised by surgical strike in PoK

Adept at fighting in hilly areas

General Bipin Rawat was considered skilled in warfare in inaccessible mountainous areas. He was posted in the Northern and Eastern Command. He was also the General Officer Commanding-in-Chief in the Southern Command.

Enhancement of these posts

In 1978, CDS General Rawat was commissioned in the 5th Battalion of the 11th Gorkha Rifles of the Army. In Arunachal Pradesh, as a colonel, he was the Commander of the 5th Battalion of the 11 Gorkha Rifles. As a Brigadier, he commanded the Rashtriya Rifles in Sopore, Kashmir. He also served in the United Nations Peacekeeping Force and was stationed in the African country of Congo. He also received the Force Commandant's Commendation twice.

Due to these track records, China leaves Pakistan's sweat

In 1986, he took over the responsibility of the chief of an infantry battalion on the LAC with China. General Rawat has also commanded 19 Infantry Division in Kashmir. He has not only led India in the campaigns of the United Nations but also in the United Nations. He was appointed as the Vice Chief of Army Staff on 2 September 2016. He has been honored with Yudh Seva Medal, Sena Medal, Uttar Yudh Seva Medal, AVSM, Videsh Seva Medal.